This weekend I harvested 3 cantaloupes from our garden. Two of them were squishy so I was anxious to crack this one open as it was super pungent. It isn’t the sweetest cantaloupe I have ever had, so I should have waited a few days to open it up. This picture was shot with my 50mm f/1.8 at ISO 100, F/4, 1/8 sec.

One of my personal goals of gardening each year is to produce fruits and vegetables for my smoothies (carrots, apples, bananas, spinach/kale, blueberries & strawberries). I haven’t had any luck getting them all to harvest at the same time, but maybe one day. This fall our garden at the Barn at the Chastain Park Conservancy has featured smoothie ingredients carrots and kale. We had a big snow a couple of weeks ago and decided to get these beauties out of the ground. This bunch of carrots came out red, orange & yellow.

I suppose it has been a week since the last vegetable harvest, at least for the pole beans. Today I walked away from our garden at Farm Chastain with enough beans for the family, 3 ears of Silver Queen corn, and one of Silver King. I also picked a cucumber for Martha and some squash for this week. The corn was a little early to be picked but it sure was good. I think it has another 10 days of fattening up to go, but I ran across several worms which made me nervous so I went ahead and picked some for dinner. Picking the green beans is a challenge for sure, they are super healthy so there is a ton of foliage to get through to find the beans.

I am most proud of the corn. If I were to be stranded on an island it would be a must have for me. You can also see a yellow pepper in the picture above. It needs a couple of days to sweeten up, but also looked in danger of getting eaten up out there, so I went ahead and picked.

We had two watermelons growing nicely only to come back today to find them totally rotted out. Not sure what got to them, but they were super nasty. I'll spare you that picture.

Years ago I bought a crock pot with ideas of all the wonderful recipes I would create. Well I pulled it out a couple of weeks ago and have used it once with solid results. With the thunder snow accumulation projections up to 7 inches in Atlanta I wanted to cook up my first pork shoulder. I grew up in Macon GA and my best friend’s family owned a BBQ restaurant. I won’t go into all of the details, just visit Fincher’s BBQ on Houston Avenue, you’ll figure it out. Anyway I have a problem where things don’t get done because I’m waiting on them to be perfect. I know Jake isn’t going to give me his recipe, and I love Sweet Baby Ray’s sauce, so I decided to go for it.

I went to Sprouts and picked up a pork shoulder. The recipe I found on Chowhound was pretty simple, apply a rub, add chicken broth, and cook for 9 hours in the crock pot. I turned on the Crock-Pot at midnight, excited to see what would become of it by morning. At 4:30 I was awoken to “what in the world is going on in the kitchen?” It was the dankest smell in the world, like a wet blanket of pork belly filling every crevice in our house. I got up and decided to move the crock-pot to the garage for the second 4.5 hours. Once it was done I took it outside to see how it turned out.

The first thing you will notice outside is that there is zero snow. Nope, nada, just the remnants of the freezing rain and sleet that we got throughout the night. Ben called it the ultimate disappointment. We move on… Just as the recipe read, the pork  was literally falling off of the bone. It was perfect!

We ended up getting out of town and heading up to Cartersville, GA to visit with family and get our hands on some snow. That worked out just fine since I had 4 lbs of pulled pork. On the stove I combined the pulled pork and Sweet Baby Ray’s BBQ Sauce, mixed up some cole slaw, and we were in business with some BBQ sandwiches. 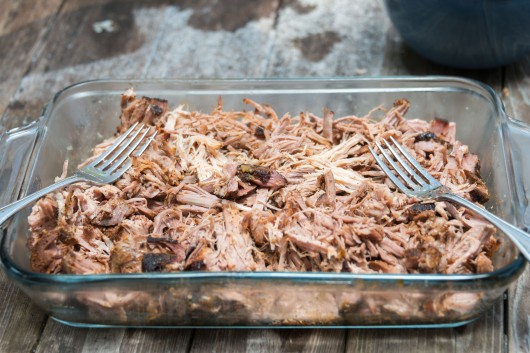 My favorite way to enjoy BBQ.

I hope to try out some different recipes, and will most likely do it next time on the Big Green Egg. Stick around and see how it turns out.

After picking a few of the straight eight cucumbers this summer I have realized mine are not going to resemble either of those descriptions. A straight eight cucumber is supposed to be long and straight, about 7-8 inches. The first fruit was really fat and short, and while I waited on it to grow, it turned yellow and became compost food. This time I picked it when it looked about right, just not straight or eight. Here is the picture I got of it. On the right side you can see it oozing from the fresh cut. Click on the image below to see the hi-res version on my website.

Based on some articles online this shape is due to a lack of bees getting their pollinating on. I have definitely noticed a lack of bees this year for some reason or another.

Yesterday I was searching for a way to use some of the basil that I needed to harvest from our garden.  When I searched for a low fat basil chicken recipe, the first three results pointed to a Lemon Basil Chicken recipe on a blog called Eat Yourself Skinny.  Here is the link to the recipe: http://www.eat-yourself-skinny.com/2011/03/lemon-basil-chicken.html.

I followed the recipe just as it is, but instead made it on the big green egg using the plate setter and cast iron grate.  Let me tell you that chicken was superb, juicy like no other I assume due to the brining.  Anyway it’s a simple recipe using household items plus some basil and a lemon.  I also used some basil to top some tomatoes.  mm good! Over the past year I have been drinking some sort of smoothie just about every day for lunch or dinner.  The smoothies have evolved from heavy fruit with orange juice and a lot of spinach to tons of vegetables and a variety of fruit.  The evolution had a lot to do with the blenders I was using.  I started off with a Ninja bullet which did the trick pretty well as long as you didn’t mind chewing your smoothie.  My next blender was another Ninja Professional Series which I thought was going to prevent me from having to spend $400+ on a Vitamix.  The blender was fine but did nothing better than it’s predecessor.  This year I caved in and bought a Vitamix at the Cook’s Warehouse.  People have been raving about them forever, literally they have been around for a really long time.

It’s really clear why everyone loves them, there is no comparison.  Before I was limited to soft fruits and even then I was chewing seeds and skin.  With the Vitamix there is none of that and the ingredient list is out of site!

Here was my smoothie before the Vitamix:

Here is my smoothie recipe today with the Vitamix: 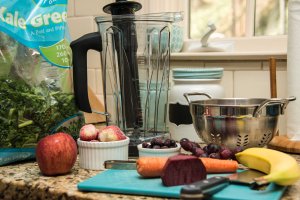 This makes a 32 ounce smoothie with 381 calories and endless health benefits.  Over the past year I lost 40 lbs and 4 pant sizes drinking this smoothie, exercising several times a week (running around Chastain Park 3 +/- miles) and eating relatively healthy meals at other times.  The “eating relatively healthy meals” was not and has not been consistent, but the smoothie has been, and I have maintained the weight I am at for 6 months.  I say this because often times I eat what my kids are eating, whether it’s at the concession stand or Chick-fil-a.  So far I have found that if I am consistent with the smoothie and exercise, I can eat whatever for dinner and they offset each other.

So for those of you out there looking for a healthy smoothie recipe, this is the real deal and tastes great!